The Capt.’s Reddie, better known as simply Cappy, never let on he was in pain.

In show after show, the 7-year-old bay Thoroughbred carried his young owner higher and higher, wrapping up their 2010 dressage season with a prestigious finish as reserve champion.

Even after Augusta Lord packed up the ribbons and had begun training her fine horse for more, Capt.’s Reddie seemed only a little stiff and mildly unhappy.

“We started to have minor training difficulties,” Lord says, “and everyone suggested I start injecting him. But, I just wasn’t comfortable injecting such a young horse without knowing what was causing his stiffness. So, I took him to the MidAtlantic Equine Clinic, and the vets there were baffled too.”

Veterinarians gave him every lameness test in their arsenal. He passed with flying colors. Then finally, they trotted him in a 10-meter circle on a lunge line and concurred: “Something looked a little funny in the right hind.”

At this point, months had passed since horse and rider had concluded a show season so successful that he was pinning as high as sixth in rated shows. And it wasn’t until spring of 2011 that veterinarians discovered what the stoic young horse had been hiding.

A chronic hole in his suspensory tendon, upper hind, showed 30 percent of the ligament was gone, Lord was told.

“The vets told me he shouldn’t even have been walking sound on an injury like that, and he carried me through a whole show season!” she says. “It made me feel awful. I had no idea.”

And from that moment on, the young rider, who was just a teenager, resolved to do everything she could to ease the pain in her beautiful and courageous horse.

Beginning with shockwave therapy to boost circulation and stimulate blood flow in the area, Capt.’s Reddie was ultimately treated with stem cell replacement therapy, she says.

“The vets made an incision in the upper fatty part of the hip and spun the fat cells down to stem cells and inserted them into the hole in the ligament,” she says, noting that expenses were covered by her very supportive equine insurance company, Hallmark Insurance, who were “fantastic” as she and her horse endured months of testing and procedures.

After the surgery, Lord and her OTTB embarked on a two-year recovery. The young rider never left her horse’s side. She graduated high school, deferred college for a year, and in the winter of 2011, she packed her bags, loaded her horse onto a trailer, and traveled to Massachusetts to serve as a working student for Olympic dressage rider Dotty Morkis.

“I lived in the hayloft of the barn and I spent my off hours rehabbing him, every day,” she says. “I had no family in Massachusetts, I didn’t know anyone, and being a working student can be brutal. There were times I found myself sitting on the floor of his stall, crying.”

Throughout the winter, they walked and walked and by spring, when Lord was required to relocate to Florida to continue the working student position, her supportive mother Debbie Lord took over the reins.

In May 2012, after spending nine months in Florida, availing herself of both riding and training opportunities, including a position with international Grand Prix riders Caroline Roffman and Endel Ots, she was able to return to Massachusetts to embark on her college plans and to have her beloved horse reevaluated.

And to her joy and great relief Cappy had fully recovered. All traces of the hole had vanished, and he was ready to begin to rebuild muscle using all four legs equally well, without having to compensate for the soreness.

“He was a different horse, but I was different too. In Florida, while he was rehabbing, I was learning to be a new rider. And my horse, who had been compensating for his injury all these years, had to remake himself too,” she says.

Now the pair is entering another learning phase. Lord is studying for a career in insurance, a backup plan to her desired end-goal to become a professional rider.

And Cappy is right there with her, a few miles down the road from her college campus, a steadying force in her life, avowed partners to the end.

“I’ve had so many trainers tell me to sell him and get a horse I can compete with, but I’m never going to leave him, I couldn’t,” she says. “He was there for me … and I couldn’t imagine doing anything without him.” 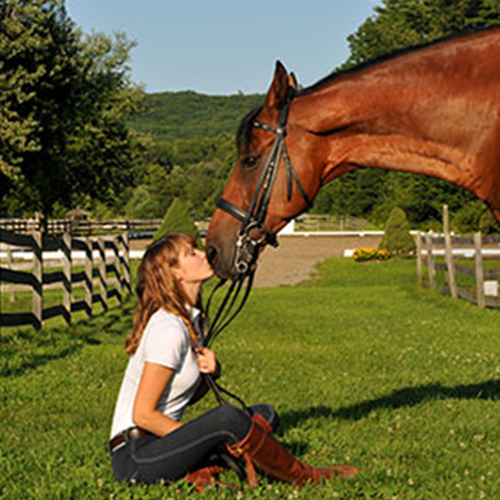